The Beauty Salons and Barber Shops of Main Street, USA 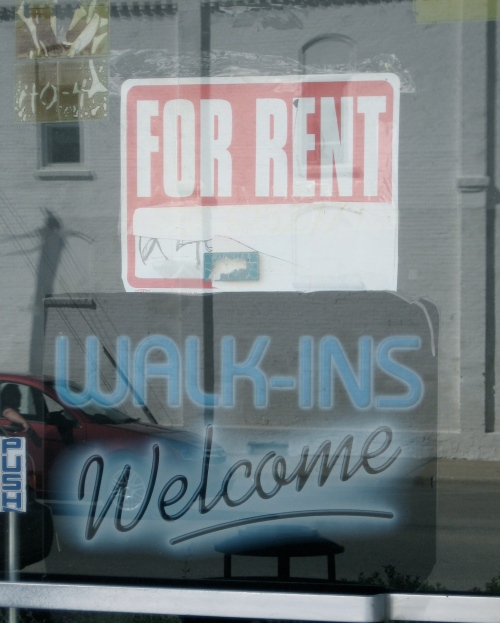 Part of my off-the-grid post-graduation time involved road tripping approximately 3,500 miles around the big open middle part of our country. We stopped in a lot of small Midwestern towns, and I felt like I was seeing beauty salons, barber shops, and nail salons everywhere we went. So I started snapping pictures. END_OF_DOCUMENT_TOKEN_TO_BE_REPLACED

[Best of Beauty U] But Have You Considered a Recession-Proof Career in Beauty?

Ah yes, our post-Christmas slowdown. Which was followed by a brief spring/early summer speed-up and then quickly replaced by a major summer slowdown. As mentioned in my graduation post, most of my fellow Beauty U graduates are still job hunting. So I think we may need to rethink this whole “recession-proof” concept.

Business is not so great at Beauty U right now. END_OF_DOCUMENT_TOKEN_TO_BE_REPLACED

Filed under Best of Beauty U

But Have You Considered a Recession-Proof Career in Beauty?

My 600-hour adventure in esthetics school. Read about the project, or catch up with weeks 1-8.

Business is not so great at Beauty U right now.

We had a bit of a pre-Christmas rush, with clients coming in for facials, waxing and hair coiffing before the holidays, but by all accounts, it was way slower than last year. And this week, the appointment book is empty. The senior girls, who usually work on “real” clients, give each other the high-priced glycolic peels and back facials, or sprawl on the facial beds and gossip because there’s nothing else to do. (We all need to perform every spa service a specific number of times before we’re allowed to graduate, and while it’s easy to rack up 75 basic facials, it’s harder to get the more expensive treatments done, especially now.)

It’s less obvious to us freshman girls, since we aren’t allowed to work on real clients yet anyway, except when somebody brings in a friend to play model. But the Beauty U Powers That Be are determined to eke out sales where we can. The models used to get their service for free, but now we’re charging half price.

Plus the supply closet is looking sad — but placing a reorder is starting to seem like urban legend. Miss Jenny wants to demo an eye treatment and the Repechage Four Layer Facial tonight, until we discover that we’ve been out of all the products since early December. Last week she brought in her own products to demo the Repechage Vita Cure Facial for mature skin because we were out of that one too. But each Repechage facial costs $20 wholesale, so Miss Jenny can’t afford to play supply closet too often.

Since things are so slow, we bring in Julie, a senior cosmetology student who also has time to kill tonight, and Stephanie gives her a facial with stuff from Clinical Aesthetics Research, a cheaper brand that we do have in stock. She confesses that she’s just been splashing water on her face at home, and Miss Jenny switches instantly into retail mode, upselling the cleanser-toner-moisturizer that is the holy triumvirate of skin care. “Retail is a vital part of your business,” she says afterwards. “Especially on slow days.”

Meanwhile, here’s a little tidbit from a Professional Beauty Association press release that just landed in my inbox (with the same subject as this post heading):

Salon and spa owners reported a net increase in staffing levels according to The Professional Beauty Association Salon/Spa Tracking Report, Third Quarter 2009 In fact, twenty-six percent of salon/spa owners said they added employees between the third quarters of 2008 and 2009. Looking ahead, 49 percent of salon/spa owners expect to have higher staffing levels in six months (compared to the same period in the previous year).

The beauty industry just cannot get enough of the fact that salons and spas are still hiring after just about every other industry out there bit the dust last year. The New York Times reported in June that beauty school enrollment rates are up as high as 25 percent around the country because beauty schools are making much of all of the jobs you’ll find upon graduation, retooling their approach to appeal to career changers (especially those doing so out of necessity) as well as recent high school grads.

We hear about this great job potential all the time at Beauty U, from the admissions interview to the Scott’s Beauty Business Sense workshop a few weeks ago. There’s the ever-popular Lipstick Index theory, where Miss Jenny regularly assures us that she’s busier than ever now. “When times are hard, people want to feel good,” she says. “I have clients who tell me they’ll give up their phone before they’ll give up their facials.” And then there’s the fact that it’s much harder to out-source salon jobs to a less expensive workforce because customers just won’t go to Mexico or India or wherever to get their hair cut. (Though you better believe most brands are sending their product manufacturing to a factory far far away from here.)

But Hannelore Leavy of the Day Spa Association committed a bit of industry blasphemy by telling the New York Times that ten percent of her contact list of 18,000 spas have closed because the recession “hit us ahead of most businesses.” The LA Times is also reporting that consumers are going the DIY approach on hair, skin and nails while times are tough, and market research firms are predicting that we’ll spend almost 9 percent less on cosmetics in 2010.

So I guess it’s little hard to stay focused on our super post-graduation job potential, when the biggest sale of the night came from another student. “You skin looks incredible now,” Miss Jenny tells her. “And if you keep up with your home regimen, these results will really last.”

Julie is beaming all the way to the cash register. And we all try not to think about how she actually lost money tonight, since she could have been earning tips, if only there were customers with hair to cut.